The Fortnite Meteor is incoming!

Home The Fortnite Meteor is incoming! 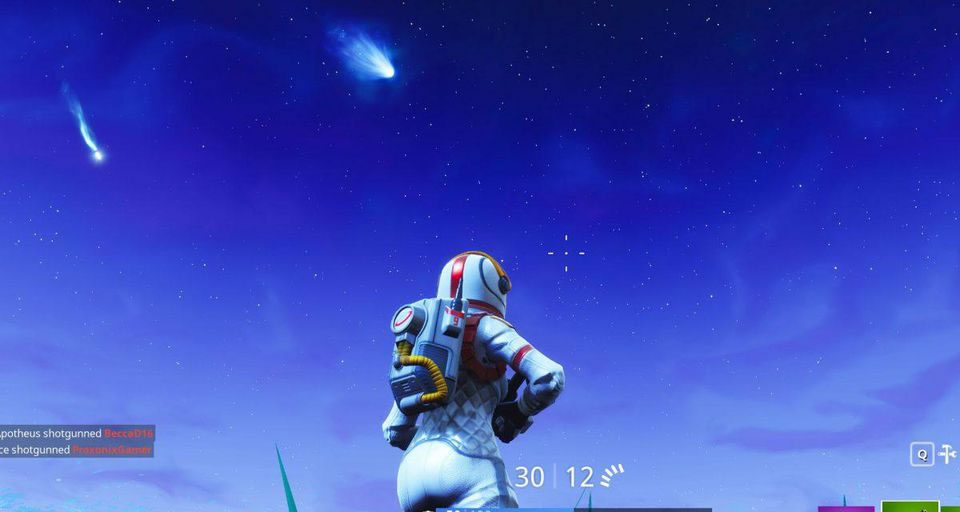 The Fortnite Meteor is incoming!

In addition to foreboding meteor overlooking Fortnites battle royale players will now find that small comets also fill the sky above them as they battle for supremacy over the map.

We speculate this can only mean one thing… more than just tilted towers is going to change.
Pictures are already making the rounds around social media speculating that titled towers will be replaced by a new locale “Crispy Crater”. No doubt players would likely avoid this place as if there’s one thing a crater would provide it would plenty of open ground unless we can hope to find some tactically placed ruins of the old tower within.

Epic has yet to announce future changes within the Battle Royale arena but over here at GG we simply can’t wait for the game to be shaken up that little bit more.

Until then we are left wondering. Will we mourn the mourn to the demise of Tilted towers? Or will we rush to plant our port-a-forts in the center of the crater. Time will tell!

Gibraltar Gamers
Literally LOADS of games on at Cdkeys Black Friday Sale! Too many to list! Go check em out!

Black Friday Video Game Deals | CDKeys
JavaScript seems to be disabled in your browser. For the best experience on our site, be sure to turn on Javascript in your browser.
cdkeys.com
View on Facebook

Gibraltar Gamers
Black Friday Deal, get a full year of Humble Choice for only £99!

November 2020 | Humble Choice
Our Black Friday sale is here with 45% off a year of Humble Choice Premium! Pay just $99 USD for over $2,000 USD worth of games. New subscribers only. Offer ends 11/30. Terms apply.
humblebundle.com
View on Facebook

Gibraltar Gamers
Sega's 60th Anniversary is in full swing over on Steam. Don't miss your free games and discounts on their great games!

Save 100% on Sonic The Hedgehog 2 on Steam
Dr. Eggman (aka Dr. Robotnik) has returned, turning helpless animals into robots and forcing them to build his ultimate weapon, the Death Egg! But this time, Sonic has a friend that can help him: Tails! Find the 7 Chaos Emeralds and stop Dr. Robotnik’s evil scheme!
store.steampowered.com
View on Facebook