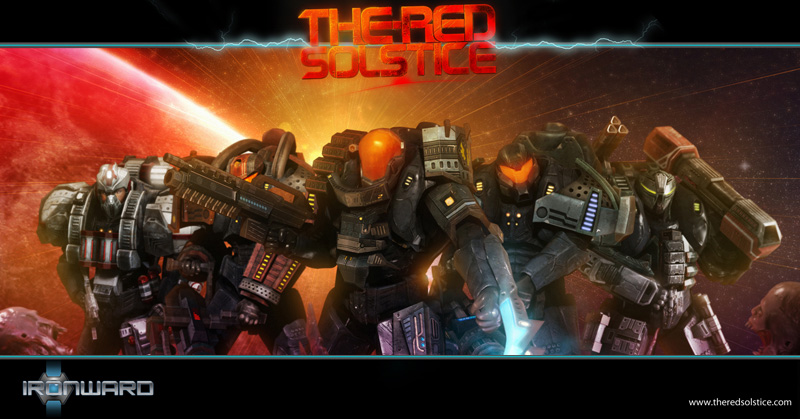 Check out our Review for “The Red Solstice”, a tactical, squad-based survival game set in the distant future on Mars.

The story behind The Red Solstice doesn’t extend much further than a single paragraph of Lore summarized into a video that you get to see EVERYTIME you load up the game. Basically, Humans have been forced to live on Mars, a still inhospitable planet plagued by a recurring sandstorm named “The Red Solstice” and their colony leader decides, during one of the more deadly storms, he needs to be evacuated. Things go wrong quick and soon enough you and your evacuation team are stuck in an abandoned base, with no power or supplies, limited ammo and swarms of alien enemies (and zombies!).

As for the game itself; it’s described as a squad-based survival game. As an example it plays much like a Starcraft 2 dungeon mod or Dawn of War 2. What makes it’s single player mode unique though is it’s “Tactical Mode” which slows play to about 10% speed and allows you to make tactical moves and orders for your team in order to out position enemies, lure them into choke points or complete vital objectives while the rest of the team covers your back.

First impressions of the game are not great. The art style is bland and simple, voice acting is sub-par and with very little background on the characters involved you find yourself immediately not caring too much about whats going on. The first 15 minutes of the game serve as a tutorial but are  still a slog to get through.

However,  soon after it becomes clear, very quickly, that there is much more to the game than first perceived. Progressing through the game becomes more tactical and strategic, one wrong move or failing to keep a decent pace through fighting your enemies results in a very dead party and a failed mission. Giving specific orders to your party becomes a necessity the further you progress in the game and sometimes you’ll find that you spend 50% or more of your time in Tactical mode alone as breaking concentration, even for a small while, results in catastrophe. The game is rife with high pressure situations that give a feeling of pure relief when they are over. So much so that, depending on what kind of gamer you are, you may have to take regular breaks simply to appreciate of the enormity of the fact that you managed to make it through some of those situations with your whole squad intact.

We’ve only recently received our review key and are a bit behind the rest of the community and due to this it has become very hard to take part in online multiplayer games as joining a public game lobby with a low level results in promptly getting kicked right out of it. As a result we get the feeling the Red Solstice community itself seems rather toxic at the moment with higher level players outright refusing to play with lower level players as it would be waste of their time. If the single player experience is anything to go by this is actually quite a legit reason though, as progression into multiplayer missions would extend only as far as your teams average experience level and one weak link could spoil it for everyone else.

Perhaps in time something will be done to rectify this situation but for now we can only view our multiplayer experience as a negative one. While player interactions may not be the developers fault directly it is up to them to provide their players with other matchmaking options if they hope to see The Red Solstice community thrive for the long term. As it stands a gamer in a close knit group of steam friends would absolutely love this game  just as it is.

So Gibraltar Gamers, if you plan to Purchase The Red Solstice, make sure you have some friends to play it with or else you simply wont get to get the most out of your money. At least not right now anyway.

Have more questions? Want more gameplay videos? Got the game yourselves? What do you think? Let us know in the comment section below!