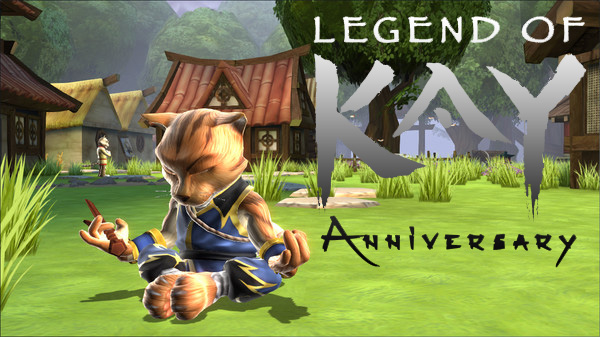 There was a time, long ago, when playstation 2 platformers were the games EVERYONE wanted to play. Games like Jak (and Daxter) 3, The Legend of Spyro and Ratchet and Clank dominated the genre at the time… Legend of Kay didn’t. As such, the only place most people have seen “Legend of Kay” before now was probably the bottom of a bargain bin.

It’s for this reason that it comes as a surprise that Nordic Games took the time to remake the whole game at all. With practically no fanbase to think of to support the games re-release it just seems odd to go through all the trouble of remaking it especially now that it has to compete against modern platformer titles such as Zelda, Super Mario Galaxy and Darksiders (to name a few).

As with most HD remakes of old games the core game of Legend of Kay remains unaltered, along with all its flaws such as its worst offenders:

Despite these issues though the game is actually quite fun. While it’s definitely aimed for the younger generation of gamers playing the game is universally entertaining due to overall decent combat, puzzles and a steadily increasing difficulty curve.

After a couple of hours play you’d actually find the game to have far much more to offer than you would have first expected in the first 30 minutes.

Those first 30 minutes, however, are a slog to get through. With only basic sword swinging attacks and basic movement controls at your disposal you have little to look forward to as the game introduces you to its fairly childish protagonist and his cringe worthy stereotypically portrayed friends and enemies.

After that primary hump however Legend of Kay offers regular changes to the gameplay quickly introducing you to one-use consumable items to make combat a little more strategic (bombs, berzerker potions, BEES in jar) as well as new weapons (Hammer and Claws) to mix things up a little when you’ve got a little bored of the default sword weapon (still my favorite though). The actual combat within the game is fairly fast-paced and fun too as it demands some skill and attention as simply button bashing attack buttons will probably get you killed.

As for the game itself the environments are fairly pretty to wander around, music is pleasant and fitting for the most part and, once you get over the childish nature of the game, the actual story is pretty decent too and it is, undoubtedly, a genuinely FUN game. That said though, this game is old school and, even though it tries hard, its core game-play is outdated when compared to recent platforms games.

If you (or your kids) are a fan of platform games made simply for the sake of being fun for all ages then you’d probably enjoy Legend of Kay.
Despite its age and shortcomings it has its charm and sometimes that’s all a game needs to deserve a second chance at life.

If you think so too you can Purchase Legend of Kay at GOG.com